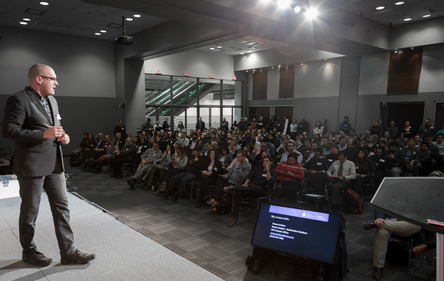 Before his monthly meetup for March, Tom Emrich tweeted that when he first started We Are Wearables in Toronto last year, it was just him and a box of wearables.

But Monday night showed how much his group has grown: Emrich announced that WWTO was officially the biggest Wearable tech meetup in the world.

Over 700 people signed up for his event, Wearable Tech – Privacy, Identity and Payments, held at the MaRs Discovery District. Though the maximum capacity was about 600, many of those waitlisted showed and waited outside of the auditorium, hoping that they could take the spot of a no-show. Booths in the demo area from wearable companies like Nymi and Meledii kept the crowd busy as they flooded in.

The event sparked discussion from big players in the financial technology industry about how how wearables and mobile payments present both opportunities and challenges in becoming a means of identity. Though mainstream wearable tech use isn’t yet the reality, a recent report released by Deloitte km said that 2015 would be a tipping point for mobile payments as more retailers adopt the technology. The hype surrounding the Apple Watch and Apple Pay shows that the public is open to the technology.

Kicking off with a short speech from Vance Lockton, a senior analyst with the Office of The Privacy Commissioner of Canada, Lockton cited how PIPEDA (Personal Information Protection And Electronic Documents Act) is used to protect the public in the context of wearable use.

“PIPEDA is technology and principles based,” he said. “We don’t say, here are safeguards that you have to meet for wearable technology. We always go back to reasonableness and appropriateness.”

Though he expressed openness towards wearables, he cited some interesting challenges that will inevitably become a bigger conversation.

Of course, the panelists were eager to get into discussions about these concerns and the future of wearable use. They included Alexander Peh, Head of Market Development and Mobile at PayPal Canada; David Schifman, Director of Business Development at Nymi; Ali Jiwani, Payments Innovation Analyst at RBC; Adam Nanjee, Financial Technology Lead at MaRS Ventures; and Jeppe Dorf, Vice President of Transaction Services at Rogers.

On the topic of privacy, Schifman quelled concerns that third parties could analyze a user’s biometrics using the Nymi band for their own purposes.

“Brands and other companies we engage with, they don’t want your biometric data,” he said. “We have no cloud company and it’s up to the user to manage and own their biometric.”

Though the panelists, of course, agreed that privacy was an issue, the issue of how to show that wearables have value to consumers posed interesting discussions for much of the night. 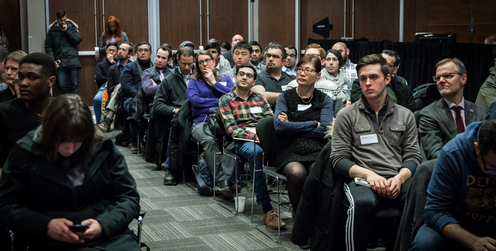 “We’re reliant on what consumers and businesses want to do. Do Canadian consumers want a smartwatch? Or do they want to go with a bracelet?” said Peh. “I still think there needs to be a major advancement, and I think payments and identity are two areas that turn wearables into something that people understand and see value in.”

Jiwani echoed this idea of the wearables industry being largely driven by consumers.

“I think part of the challenge is looking at the different opportunities that exist with consumers and trying to adopt to their behaviours,” he said. “Consumers are always interested in trying to figure out what’s easier for them so it becomes a challenge to figure out how can we provide those services.”

No one could deny the rise of biometrics as a reliable way to confirm identity in the wearables industry—even Lockton cited his excitement for the Nymi band.

“I think one of the most important factors here are that things like your credit card number can change, but your body metrics never change,” Schifman said.

There were disagreements about exactly how wearable technology would become useful. Nanjee talked about how the ease of using wristbands to make payments removes the many steps required to make a traditional transaction, such as taking out your wallet and putting in your pin, but Dorf wasn’t as optimistic.

“I don’t know if a wristband is necessarily a great way to pay,” said Dorf. “I think so if it was a case of biometrics being tied to my identity to make a $500 purchase, but a $2 cup of coffee? With a mobile payments app, you can put your phone at the terminal and the transaction is done.”

Peh posed an interesting question on the rise of wearables.

“When is enough, enough?” He asked. “We’ve got smartphones, smart watches, maybe something like Google Glass. When do I just become a giant electronic device?”

The diversity of opinions covered by the panel highlighted that it’s still not completely certain how wearables will make their way into the mainstream, even to those in the industry.

“It’s still the early days of wearables,” said Nanjee. “We still have desktop PC’s and smartphones. There are times when we have to decide when to take out our laptop versus our smartphone versus our tablet. We’re not yet there on wearables but I think we will get there.”