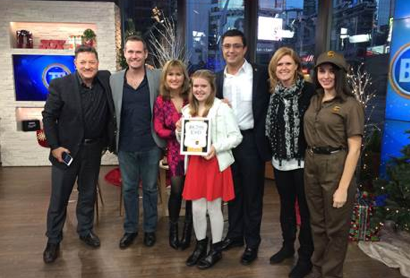 Abi Smithson, the 10-year-old entrepreneur and founder of Love Sandal, a woman’s footwear startup in Toronto, got a surprise delivery from UPS Canada.

Live on CityTV’s Breakfast Television Toronto yesterday, Paul Gaspar, UPS Canada’s director of small business, surprised Smithson with an $8,700 (USD) donation to her Indiegogo campaign to support the launch of her startup.

“UPS wanted to do our part to support entrepreneurs,” Gaspar said. “[Abi] has the entrepreneurial drive and creative ideas. And at such a young age, that’s remarkable. We were extremely inspired. I wasn’t doing that when I was 10 years old.”

Smithson, the youngest member of Ryerson University’s Digital Media Zone, started the campaign in October to crowdfund for her brand. The donation from UPS took her just over her intended goal of $15,000. This will fund her first order to the Aldo Group and set up distribution worldwide.

“Love Sandal is not just about a beautiful sandal,” Smithson said. “It’s proof that anyone, no matter their age, race or gender, can do anything. Love Sandal is about chasing your dreams and following your heart.”

That’s why she plans to donate 10 per cent of the net profit of Love Sandal sales to the SickKids Foundation.

Smithson’s entrepreneurial ambitions began when she took Kids Learning Code, a program ran by the Toronto-based Ladies Learning Code to teach programming and other technical skills to youth. Through the program, she developed her own video game and learned HTML coding, CSS and Google Glass.

“The experience was not like my normal school because I did things that I never would have done in my classroom,” Smithson told Techvibes earlier this year. “I learned how to set up my Gmail, create a blog and website, and then learn to code, which I want to know more about.”

Smithson aspires to be either an inventor or coder when she’s older. “I like inventing because it lets me be creative and solve problems. I enjoy coding because it is fun and I get to learn a new language.”

The idea for the Love Sandal, “a shoe for girls and women that leaves hearts in the hand when you walk,” traces back to two years ago.

Entrepreneurship runs in the family. Smithson’s mom, Julie, and her dad, Alan, are both entrepreneurs themselves. They manage SmithsonMartin, a Toronto-based startup (of which Alan is co-founder) that specializes in multi-touch control applications for music, recording, professional lighting and performance art.

Smithson is also developing an online toolkit for young Canadian entrepreneurs like herself and has other ideas in the pipeline. “My dad and I are always looking at problems and trying to solve them through software,” she said.

And UPS isn’t going to stop doing its part either. “We will continue to collaborate with entrepreneurs like Abi,” Gaspar said. “The best part is hearing their story and their passion.”