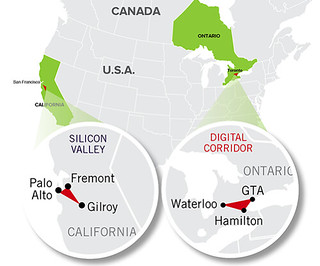 Silicon Valley has long been recognized as a destination for innovation and entrepreneurship in the fast-paced technology sector.

But in Ontario there exists one of the most concentrated centres of technology leadership and growth in the world and some argue has not received its due—until now, perhaps.

Tech-sector analyst the Branham Group has done the math to identify Ontario’s own Digital Corridor, a concentrated cluster of innovative technology firms across the York Region and encompassing the GTA, Kitchener-Waterloo and Hamilton areas.

According to the Branham Group, across the Digital Corridor there are more than 176,000 skilled professionals working in the technology sector, generating an average of $387,000 in revenue per employee.

Seven of the world’s largest multi-national tech firms conduct research and development in the Digital Corridor and the ICT companies located there have combined annual revenues in excess of $37.5 billion. These companies are major economic drivers for the cities, towns and regions that make up the Digital Corridor.

“When combined with the world-class firms in the ICT and life sciences sectors, the Region is leading the way in the development of a robust Digital Corridor, creating opportunities for investment and growth,” he notes.

More than 3,900 technology firms are based in the York region, making it one of the largest areas of technology concentration within the Digital Corridor.

Known as Greater Toronto’s Tech Hub, large multi-national established tech leaders such as IBM Canada, AMD, CGI, Qualcomm and Motorola Solutions have invested in the York Region area for many years. An a vibrant community of small- and mid-size digital and medical technology innovators adds to the strength in the Digital Corridor, including successful startups such as Infradog, SwitchVideo, HandyMetrics and BrainFX.